Domingo sees lack of self-confidence in Shanto and Muminul

Kriralok Desk: Bangladesh’s innings ended with 103 runs in the first innings against West Indies. The Tigers managed 245 runs in the second innings. Nazmul Hossain Shanto and Muminul Haque failed in both the innings. Tigers coach Russell Domingo blamed confidence for their failure.

Speaking at the press conference, Domingo said of Shanto-Muminul, “At the moment, the confidence of the batsmen is at an all-time low. Big players like Muminul and Shanto are suffering from lack of confidence. Confidence is always a big issue in cricket. And at the moment they don’t have that confidence. ”

Bangladesh cricketers got out after playing bad shots in the first innings. Someone got out while playing the ball outside the leg, while someone went to push the ball off stump. These issues have also come up in the words of Russell Domingo. “I made a lot of loose shots in two innings, I made a very bad decision,” he said. 103 runs in the first innings, of course more runs should be made. He could have scored more than 245 runs in the second innings. That’s the decent thing to do, and it should end there. “

The coach also praised the bowling against the hosts, saying, “The bowlers have bowled well in both the innings. The best bowling I have seen in the first innings. It is not easy to stick to 260 runs in this wicket. I am very happy with the performance of the bowlers. Khaled got three wickets. But there is room for improvement. Sometimes you don’t get a wicket even with a good ball. You will get wickets without ever doing very well again. This is cricket. He bowled well in the second innings and took quick wickets. But he has room for improvement.

When the team was beating well in both the innings, then the captain Shakib Al Hasan stood up with his chest open. He hit a half-century in two innings. In the first innings, he saved the team from being reduced to double digits. In the second innings, Bangladesh avoided his half-century innings loss. However, the Bangladesh captain could not win the heart of the coach despite doing so much. Coach Russell Domingo wants more. He wants 100 from Shakib.

In the first Test of the series against the West Indies, the fear of losing by an innings was raised in the Bangladesh camp. However, thanks to captain Shakib Al Hasan and wicketkeeper Nurul Hasan, the visitors avoided defeat by an innings. Their 123-run partnership kept Bangladesh’s hopes alive for a long time.

However, the situation changed when the second new ball came in the hands of West Indies. Shakib caught the extra cover saying that Roach’s fuller length was falling and he was going to go out. He gave a valuable breakthrough to the Windies and returned with an innings of 63 off 99 balls.

Domingo felt that Shakib wanted to put pressure on the West Indies bowlers as the reason for such an attack from the beginning with the second new ball. His comment, ”Look, I think Shakib will always play with the mentality of running. We don’t want him to snuggle up. We want him to play good cricket shots. I think he wanted to put pressure on the bowlers. But he has to remember that if he can get past the starting situation, he has to bat well, he has to restrain himself; because he is a good player to score a century. ”

He is the highest run scorer of Bangladesh in this test. However, he also sat down with the opponent several times. The head coach of the Bangladesh team said that he should be a little more careful about his batting.

”He’s batting at number seven now, but he can bat at six. He has to find a balance between attack and defense. The position of the head, the position of the body must be kept right when killing. Because he knows he has the ability, he has shown it today. There is no doubt that you will have to take every attack strategy from time to time. But in this case, he must be sure that he is not disturbed. Because he is a great batsman. ” 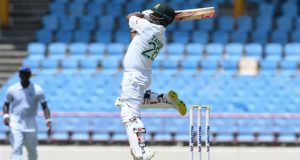